How Will Nashville Fare In The Next Downturn? 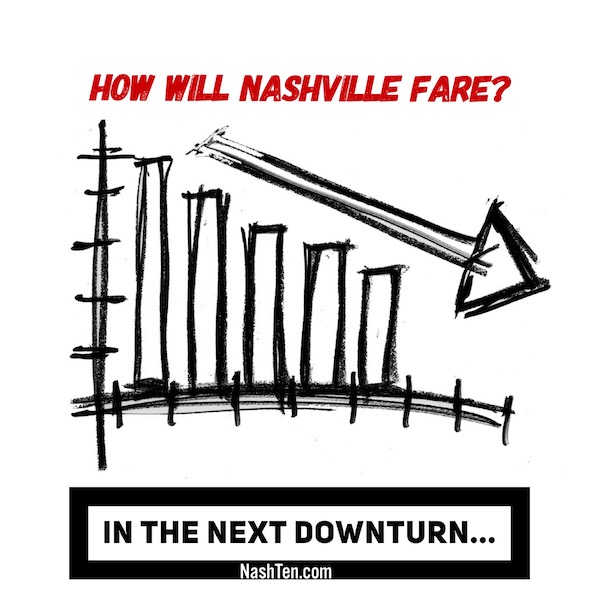 We all know it’s coming…just a question of when and how bad.

Most experts predict it is still a few years off, but you still need to be prepared.  While we can’t predict the future, we can look to the past to get a glimpse of what may happen.  Because I’ve been getting this question a lot lately, I decided to dig in for you all.

And here’s what I found.

Corelogic, a world leader in information intelligence for the housing and financial industry, recently wrote a report on the National Housing Market since the Great Recession.

Here’s what the report discovered about Tennessee:

I think Tennessee fared better because we did not have a huge run up in price before the last recession.  Some places around the country were seeing 50% appreciation year over year.

Not only is that not sustainable, but it sets the market up for a big crash when the smoke clears and the hysteria wanes.  My best guess is that will hold true when the next downturn hits.

Here’s why I think Nashville and Tennessee will prevail

And the accolades go on and on.

While the national economy is always in the back of my mind, I feel that Nashville is uniquely positioned to weather any storm and come out stronger.

And I wouldn't want to be anywhere else.

If you want a copy of this Corelogic report, just hit reply and I’ll send it to you.

The Daily Deal in Nashville is this renovated bungalow in Eastwood Neighbors [East Nashville] that is listed for less than $400,000.